My Best, Worst and Most Likely Case Predictions for the World in Five Years 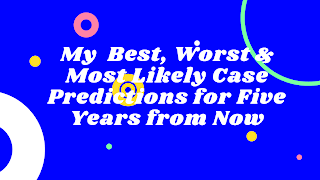 This week's blog topic had me stumped at first but slowly, I began to realise that I had plenty of ideas to write about. I suppose with the way times have changed so rapidly this year alone, we all wonder how things will be in a few years time. Being the opinionated sort of person that I am, it didn't take long till I discovered that I have quite a few opinions on different matters that are relevant to the times in which we live.  I'm going to share those opinions right now. If you're reading this and disagreeing wildly, or else feeling some kind of agreement with me, I'd love if you might like to comment at the end so we can have a good conversation about it.

My Best Prediction: The Environment Will Heal

When the lockdown first happened in India, everyone stayed at home. Well, almost everybody. Thousands of people started working from home. It was amazing. Then something strange started to happen. With fewer flights taking off and fewer cars on the road, the environment started to heal. Here in India instead of swallowing pollution in the air, we were enjoying clear skies and fresh air. I hope this is the start of the countries of the world taking the environment much more seriously. It's terrible that it took a pandemic to show humanity what what our world could be like. Yet if we learn this much, the terrible misery and losses suffered during the pandemic will have somehow had a purpose. Nothing, of course, can make up for the lives lost and the tragedy suffered. It's now being whispered that the pandemic was no accident of nature and has been engineered to force people into staying put. If so, that's terrible. But apart from that, I feel there is a real opportunity for humanity to redeem itself on the environmental front.

I think that most right-thinking people are in agreement that in the western world in general and in certain countries in particular, there was systematic oppression of people of colour. Although there were black people who did well in society, many black people and people of non-white background experienced prejudice and discrimination because of the colour of their skin and it was totally and utterly wrong. We all need to educate ourselves in matters of oppression and discrimination. We know that Nazi Germany oppressed the Jewish people. We rarely heard until later that it systematically oppressed gay people as well. That was all wrong. Hopefully, now that people are seeing the world with new eyes, history will start to be rewritten. Having said that - I see a systematic hatred of the Catholic religion and its faithful followers in no less a place than Ireland. After many years of falling in and out with the Catholic church, I am back to stay. I was told I'd 'turned Protestant' a few years ago and I was happy enough. Protestantism shook up the people of God and made us get the scriptures in our own language. As they say in the west of Ireland, fair play. It was only right. But my heart has always been with the Catholic church and always will be. But I've noticed a hatred of Catholicism in the media. For example, as I mentioned on Facebook, I read an article in the 'Irish Times' in which a writer decried the 'bad old days of Catholic Ireland.' I was appalled. She used the word 'Catholic' as if was interchangeable with 'evil'. I wrote to her and to the newspaper editor complaining about it. Of course, I was ignored. Yes, I know there were abusive clergy and that many people, unfortunately, have horrible memories of the Church. Those people were wronged and nothing justifies that. But they don't seem to understand that these abusers were bad and now they're gone. The 'Irish Times' form of persecution is to slip condemnation into anything to do with Catholicism. Recently, the former Irish Taoiseach (Prime Minister) Leo Varadkar, of mixed Catholic/Hindu parentage, referred to the then opposition leader in the Irish Dáil as being like a Catholic Priest who preaches to people to be good and then goes away and sins in secret. Varadkar, who was taken to task for his remark, apologised in due course. But it's appalling that people think it's okay to criticise anything to do with Catholicism in that way. I know it's a backlash against abuse, but not everything to do with Catholicism means abuse. Any abuse that may be taking place is being rooted out. Accountability is greater than ever now, but that ever-present hatred is being felt. I detest it. In the west it's like 'happy Diwali to all our Hindu friends', 'happy Eid to all our Muslim friends,' but when it comes to Catholicism, don't mention it. It's creeping intolerance and it's happening. It's all wrong.

Most Likely Prediction: We Will Live Mostly Online

Nowadays, I live online. I get Mass online. I read my daily prayers online. I shop online. I get the daily papers online. I write online. I publish online. Welcome to the new normal. You can shop and spend your money online. Now the Internet, in the last decade, has started to have currencies of its own, like Bitcoin. Currencies that cross borders without losing anything in exchange, not even bank fees. Dang it, you can get exercise classes online. The bonus is that the more people stay at home, the less they move out. They don't spread Covid-19 and they don't cause petrol pollution and overcrowding on the roads. As mentioned, I read a suggestion on the Internet that the pandemic was initiated to ensure that people didn't go out. Could it be true? I don't know, but I do think that's possible. The problems of the future may be very different. Fewer opportunities to discuss office politics and more talk about juggling work/home responsibilities. Companies will probably prefer using remote workers where possible. No overheads and pay when you get good work, not for time for your workers to sit around drinking coffee.

Anyone who knows me well will know that Tarot cards and crystal balls are very distant from me. Apart from a mad visit to a Dublin fortune teller when I was in my twenties, just for the experience, I keep far away from predictions of the future (BTW I know for a fact that a few Irish writers have visited that fortune teller, because I read about visits to the fortune teller in at least two books and they were almost exactly like my own experience). The Bible instructs us to trust God and not to try to find out the future by clairvoyance. On the other hand, Jesus Christ mentioned in the Gospel that when we see the signs of things, we know what is coming. So I've seen signs and I feel I think I'm on the right track. All going well, our world will be saved and we'll be mostly staying at home in the future. I think we're already talking to our friends by Facebook and video calls. Hopefully, the intolerance I talked about will not flower into full-blown hatred. I do not want to be right about that.

Thanks to Pixabay for the imagery.

The other seven bloggers who write on the same topic every Friday are  Ramana, Sanjana, Padmum,  Raju, Shackman, Srinivas and Conrad.  This week’s topic was suggested by Conrad.