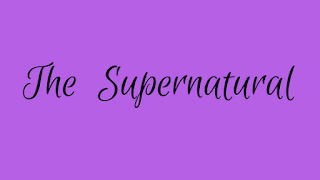 Do I believe in the supernatural? Yes, I do. My husband and I were both raised in homes where faith and religion were given the utmost importance. Although the religions were different, certain basic beliefs were the same. We both learned, in childhood, that this natural world is in a certain dimension, but there are other dimensions which cannot be easily seen or sensed in this one. We believe we have come to this life for a certain purpose and that there is a higher power, known as God, to whom we must answer when the time comes for us to cross over into the next dimension after our death in this world.

What's so unusual about that? Millions believe the same thing, in some form or another. Even the most primitive human communities live in constant awareness of the supernatural dimension. In fact, they're even more aware of it, living, as many of them do, at the mercy of nature.

My native Ireland is full of supernatural stories. Stories about banshees, women of a supernatural race who would wail loudly when the death of a member of certain families was imminent. A particularly popular myth in the southern part of the country concerned 'changelings'. A family with a particularly beautiful child had to be careful not to brag about it. For if the 'faerie folk' came to know, they'd kidnap the beautiful infant and leave an ugly one in its place.

Could it be that those changeling stories resulted from the replacement of dead children in wealthier families by babies from poorer homes because servants were trying to avoid blame? There was a custom of children of noble families being fostered out to families of a similar status who lived in different regions of the country, in order to foster kinship. Who knows how many changelings resulted from such situations? Two times of the year when a lot of supernatural activities occurred in Ireland were spring and autumn, when the world slips into a different season. 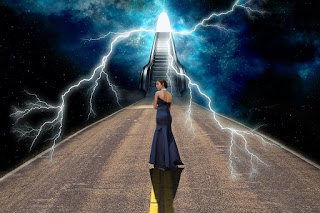 Pre-Christian Ireland had a mythology of its own, with gods, goddesses and festivals aplenty. Hindu India was no different, having a plethora of spiritual deities and as many religious festivals as anyone could want. And strangely enough, a lot of supernatural activity went on around the spring and autumn seasons in India too.

The supernatural and faith

I consider myself to be a faithful Christian, but I've always had a bit of a fascination with the supernatural. I sat up late many a Saturday night in Dublin, watching horror movies about vampires and mummies, although they're not really in my comfort zone. I once listened to a song about a bunch of kids getting excited about telling ghost stories late into the night. There was a line which said: 'It's kind of fun getting scared when you know it's not for real'. That is certainly true.

In the Book of Genesis, the Bible tells us that God was tired of being ignored by the human race, which had turned away from Him and started to worship other spiritual entities. So he communicated with Abraham the patriarch and made Himself known as the eternal Father God. He took Abraham's descendants  (those which came from Abraham's especially promised and very blessed son Isaac and his younger son, Israel) as his own people and kept them separate from the world, until there was a conducive atmosphere for Jesus Christ, God's only-begotten Son, to be born as a Man. Once Jesus Christ performed His work of redeeming the human race from the clutches of death with His own Blood sacrifice, He returned to His Father. But when the Father was preparing the great grandsons of Abraham and their descendants to be the people from which God the Son would be born, he was very careful to instruct them to stay away from any kind of unauthorized supernatural activity. The Israelites were forbidden to practice mediumship and also forbidden to indulge in the local religious festivals of the land of Canaan, in which they were to settle. They were also forbidden to cut their skin or even to have tattoos applied. Apparently, the Canaanites carved religious symbols of their own into their skin. The sooner the Children of Israel lived a life pleasing to the Father, the quicker the Will of God could be done. The Israelites disobeyed numerous times and it took about a thousand years for the Father's Will to be carried out in Israel and ultimately, the world. If we want to please the Father, we have to steer clear of idolatry and superstition and concentrate on reading the Scriptures He has given us. The Father desires to be worshiped 'in spirit and in truth' (NT John 4:24).

I don't have much personal experience of the supernatural, but one recent experience comes to mind. I used to bring my dog, Duggu, for a walk down a certain road every morning. I noticed that when we walked on a certain stretch of the road, the dog became very aggressive and disturbed, jumping around, pulling on his lead and even seizing my arm in an aggressive manner. Duggu is a big dog, so that was a scary experience.  When I talked to a couple of friends about this, someone pointed out that the stretch of road where Duggu went crazy was beside the cemetery of a particular community. I hadn't been aware of the fact because there are no headstones, just flat soil and lots of overhanging trees. Obviously, Duggu could see things that I simply couldn't. Despite not possessing human intelligence, it appears that dogs can see into the other dimension to some extent. Scary, eh?

Who knows what Duggu saw in those overhanging trees? I avoided the cemetery road after that discussion and the situation immediately improved. As God taught the Israelites in Biblical times, it's better to stay within the set boundaries and not move over the edge of this dimension. I truly believe that.

I have recently resumed blogging with the Loose Bloggers Consortium, a group of bloggers who post on the same topic/prompt every Friday. I'm an old member of this friendly group and delighted to be back. The current blogging members of this group are: Ramana, Chuck and Pravin. Thanks to my Shackman for the topic/prompt 'The Supernatural'. Sorry I'm a week late with the post, guys. I'll do an extra post this week to catch up!