By Maria May 31, 2014
Life is hectic nowadays.  My children had the examination results recently, followed by the round of admission applications to college etc.  My husband (around who my life revolves, naturally) has had major work commitments and has resorted to coming home at all sorts of odd hours (as he commutes to the neighbouring city).  In short, life is not at all regular and has, in fact, gone out of hand at times.  So this is why I'm so late with my LBC post this week.  And last week.....

I had to think a little about this one.  I'd have had it up on time last week, but this topic, provided by the former LBC blogger Delores caught me off my guard.  Odd habits? I don't have any of those?  Or do I? I've examined my conscience like the good Catholic woman that I am and I realize that I do indeed have an odd habit.  It may not be odd in Ireland from where I originate, but it's definitely odd in India.  It's carrying a handbag.  I carry one around with me wherever I go.  Even if I'm in the house, I have to have my bag in my sights somewhere along the way.  Well, the house is pretty big, of course, but still.... 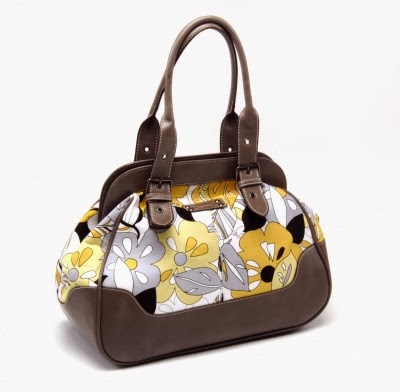 Years ago, so my Aunty Nuala tells me, possibly on the Late Late Show, a popular Irish talk show which is practically an institution, there was a discussion.  Apparently the participants were some of the prominent men at the time in Irish public life and the well known Irish feminist, Nell McCafferty who is an amazing woman and a really talented writer with a cutting wit.  Anyways, the males present were being asked some question about how they appreciated the women in their life.  Now please bear in mind, I didn't see the show, my aunt did.  Aunty Nuala and I are very alike and have similar views on many things.  So the gentlemen present, being grilled, all admitted to a man, that they seldom remember the birthday of their wives.  So Nell fixed them with an accusing stare (as only she can) and told them that they all  needed 'a belt from a good Irish handbag'.  In Irish parlance, regrettably, a belt doesn't just mean a clothing implement, it also means a slap or a blow from something.  I wonder why?  Anyway, the way I look at it, a blow from an Irish handbag would be a formidable one indeed.  My handbag is usually laden down with stuff.  Purse, keys, the (three) books I'm usually reading plus the kindle.  The hairbrush, the makeupbag (unless I'm off make up at the time, which is the usual form since I became a mother), not to mention whatever magazines or periodicals I happen to be reading at the time.  My husband couldn't believe the contents of my bag when he became familiar with my ways long ago in Ireland before we married.  "Why carry all this stuff around?" he asked.  I merely smiled and said nothing.

The handbag in the photo is very light in comparison to my usual bag of choice.  Once I was in Crete and I purchased a leather bag which looked like a schoolbag.  I still have that one.  I prefer bags made of real leather and even strong cloth.  And yes, I have loads of them.  Handbags and shopping bags are my particular weakness.  Besides books, of course.

Nice topic, this one.  Chosen by Ramana, my rakhi brother from Pune, so I believe.  It's the literal translation of 'Amen', the word with which Christians end their prayers.  Unless they're Indian Christians, in which case they'll say 'Ameen'.  As do followers of the Islamic faith, to the best of my knowledge.  Apparently, the Sanskrit version is 'thathaastu'.  Sanskrit being the scriptural language of Vedantists, those who follow the Hindu faith or philosophy.

This is my contribution to the Loose Bloggers' Consortium (LBC) group blog topic of today - and last week!  LBC links are in the sidebar and readers here are invited to check out the LBC bloggers at their convenience.