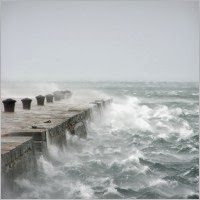 “Blow, winds, and crack your cheeks! Rage! Blow!
You cataracts and hurricanoes, spout
Till you have drenched our teeples, drowned the cocks!
You sulphurour and thought-executing fires,
Vaunt-couriers to oak-cleaving thunderbolts,
Singe my white head! And thou, all-shaking thunder,
Strike flat the thick rotundity o' the world!
Crack nature's molds, all germens spill at once
That make ingrateful man!”

I love storms and the wind.  I really feel for the people who will suffer when the storms start, though.  Here in India, where I currently live,there are many people who sleep under the stars or in makeshift dwellings.  But I enjoy listening to  the wind because it has such power.  Wind power can even be used to generate electricity.

I remember, years ago in Ireland, which is quite a windswept country, on the edge of the Atlantic ocean, I took part in a school debate.  My school was debating for the motion that nuclear power stations were unnecessary in our country.  The other school was debating against the motion.  During the course of the debate, it was suggested (by me!) that sources of renewable power should be found to satisfy the country's growing need for electrical power.  Sources such as wind power, for example.

My already fragile confidence stumbled when a speaker on the opposite team, at the end of her contribution,  ridiculed the suggestion that wind power would be a viable proposition for Ireland on the grounds that she 'walked down the street several times a day and never felt a breeze.'  One of our team members, a fiery girl by the name of Cathy, stood up and challenged that suggestion when her turn came to speak.

But is Ireland sufficiently windy for wind power or not?  How could two citizens of the same country have such varying opinions?  Anything goes in a debate, I suppose.  Even a school debate.

My thanks to William Shakespeare for the quote.  And All-Free Download for the photo.

This is a Loose Bloggers Consortium post.   My thanks to Padmini for the week's topic  Members links in sidebar.  My list needs updating so apologies to members who are still listed there, who would otherwise not be.