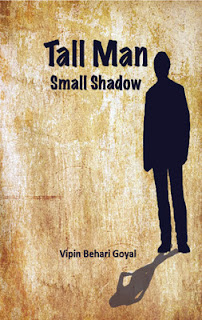 TALL MAN, SMALL SHADOW is a work of fiction by Indian author Vipin Behari Goyal.  It's published by Cyberwit.net and is internationally available on Amazon as an ebook.

It's the most thoughtful piece of fiction I've read in ages.  Short on dialogue and long on thoughts. The narrator/main character is a family man, husband of the chronically unwell Sulekha and father of the young, intelligent and marriageable Aalya.  The main character (hereafter designated 'the MC') doesn't introduce himself and we only come to learn his name towards the end.  So I'd rather not reveal his name to potential readers.

It's not an excessively long read at 150 or so pages, but it's not the sort of read you devour in a free afternoon either.  Well, it wasn't for me.  I had to stop reading every so often to digest the story. Not that I didn't find it an enjoyable read.  I did.  It just gave me a lot to think about.

The 'tall man' is an enigmatic young man who has just moved into the MC's neighbourhood, This young man, Salil, arouses the interest of various people in the neighbourhood.  The MC visits him with a parcel which has been left by a courier at the wrong house (his).  He discovers on his visit that the young man reads books by such worthy writers as Nietzsche, revealing himself to be a thoughtful reader, interested in philosophy.  The MC's daughter Aalya also develops an interest in the new neighbour, as does the MC's wife, Sulekha.  Salil himself is, naturally, attracted to Aalya, taking an enormous interest in her shadow.  He seems to covet it for some reason. I thought we were going into the areas of magic realism here, But the book didn't ultimately seem to do that, so maybe I had a perception of the novel which wasn't quite what the author had intended.

The MC contemplates various matters, such as the nature of truth and why suicide is an offence under the Indian Penal Code.  After all, one's life is one's own,so  why should trying to throw it away be considered an offence?  The MC and the chronically ill Sulekha watch over their daughter protectively, supervising her interactions with Salil. The story, however, takes on a different aspect when young Aalya, on studying for her doctoral thesis, gets into a very intimate, almost sexual relationship with her professor, a childless, married woman named Seema.  Seema seems to have been affected by the sterility of her marriage to a man involved in the creative arts and tends to prey on her young students.

I'm not sure if this piece of fiction could be classified as LGBT literature.  Seema, although displaying bisexual tendencies, is not exactly a paid up member of the LGBT community, she's more of a closet member, with somewhat predatory tendencies.  The relationship, from Aalya's side at least, is a pure, loving admiration, as relationships between students and teachers so often are in a culture which reveres education.  It doesn't seem to get in the way of her growing relationship with Salil. Seema has access to the young and attractive Aalya because her father and the MC were once comrades in a communist party group.  The MC and his ailing Sulekha may suspect something is amiss with the guru/chela (student/teacher) relationship, but in my humble opinion, they're far more tolerant of it than most western parents would tend to be.

The wheel turns in a full circle and in the spirit of karma, the characters sow as they reap.  The ending of the story could be described as satisfying, with tradition winning out in the end.  As it usually does in India.

I had a few issues with the novel.  The author jumped from first person to third person and back again many times.  Although the MC is the main character through whose eyes the story is seen, there are things happening to which he could not possibly be a party.  Like the scenes of intimacy between his daughter and the professor, for example.  I found it a little incongruous to read a male voice describing a totally female experience.  There are some grammatical feats which I had to stop short of describing as errors.  It is merely English as it is spoken by Indian people and as such, a language all of its own.  Indian English is generally very pleasing and enjoyable to read.

All in all, an enjoyable and satisfying read which teaches a few lessons along the way.

The book is available in both print and virtual form, at the usual outlets, such as Flipkart and Amazon and the rest..