Review - The 40-Year Old Version: Humoirs of a Divorced Dad 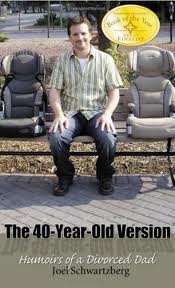 When Joel Schwartzberg got in touch with me on Facebook and asked if I'd be interested in reviewing his award winning book, my immediate reaction was positive.  Reading and reviewing books is something I love to do.  You get a free book to read and all you have to do is write a few critical lines. What's not to like?

Then, when I realized that the secondary title was 'Humoirs of a Divorced Dad' my Irish Catholic hangups started to kick in.  Divorce was a dirty word where I came from.  Visions of unloved, unwanted, neglected kids and embittered, disillusioned parents came to mind.  Did I really want to review this book?  But I'd said I would and along it came.  And read it I did and reviewing it I am.  And do you know something?  I freaking loved this book. It was seriously good.  Humorously good too.

I suppose as a reader and reviewer of romance novels, I've become accustomed to the happy ending always being a 'given'. Yet romance novels are very often just fantasies.  Real life has many shades.  They aren't all rose coloured.  Of course nobody likes the idea of divorce, but if it comes to that, it's great if the two former spouses can put their differences aside and co-parent their offspring in a sensible and realistic way.

This book isn't so much autobiography as a series of essays on The Life and Times of Joel and Life As He Lives It.  Joel's being a divorced father of three kids (all under ten at the time the book was written) colours the book and the essays he writes.  He's a great father.  He only gets to be with the kids on Saturdays ('Dadurdays', as the kids call them) but he makes them count.  He probably spends more quality time with the children then many married dads do.  In some ways, he's a spectator in his kid's lives, ever observing and watchful and ready to jump in when required.  His second wife also cares for the kids and has won them over with her patience and dedication.  :Not that Joel ever says so directly - you just find yourself reading between the lines.  The fact that the kids have such a chilled out relationship with their father and his partner probably says a lot about what a good mother they have too.  Not that Joel ever says that either.  But you probably understand what I mean.

I love the word 'humoirs'.  Humorous memoirs.  Joel is a writer anyway and happens to have a deliciously ironic and self deprecating sense of humour which I truly appreciate.  He's particularly funny when he shares about moving back in with his parents as an adult, when he was newly separated from his first wife. You just never can go back there, can you?

As I once read somewhere, 'life is strange with it's twists and turns as every one of us sometimes learns'. Joel deserves great success with his book for proving beyond doubt that a so-called sad ending isn't necessarily the end of the world after all. And that's really something.