Review - SALVATION OF A SAINT by Keigo Higashino 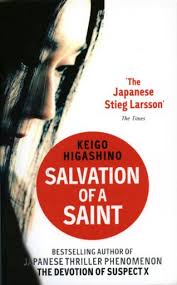 Keigo Higashino, who teased readers worldwide with his novel THE DEVOTION OF SUSPECT X about a year ago is back again with a new novel to tease again, intrigue again and keep readers turning the pages until the very end. The author known as 'the Japanese Stieg Larsson' has a reputation to maintain and he's certainly doing a good job of maintaining it.

True, it was an English playwright, Congreve, who said that hell hath no fury like a woman scorned. But this is a universal phenomenon.   When the person you love stops loving you, it's a betrayal of all you've shared.  When that person is about to leave you for a friend of yours and tries to twist things round to make it look like it's your fault, the betrayal can be absolute and unforgiveable.  Ayane's husband Yoshitaka had told her that without children, their life together could not go on. For Ayane, grieving inwardly for her failure to bear a child,  the fact that her partner turns away from her rather than standing by her in that dark moment makes a terrible retribution inevitable.  Yoshitaka is found dead and Ayane is far from the scene.  Who poisoned this man?

Who knows the truth about this apparently happy couple and their life together?  Their friends Yukiko and Tatsuhiko who had recently produced their first child and had received a beautiful, handmade gift from Ayane, a talented crafter?  Hiromi, Ayane's assistant and Yoshitaka's secret lover?  Yoshitaka, the victim, elicits no sympathy, the arrogant male who was so ready to cast off his hapless wife for a newer , younger model, as one would trade in a car. As a woman, it made me furious.  Why is it that in every society in the world women seem to have a 'use before' date?  Ayane, the woman betrayed, seems so vulnerable.  But is Ayane really what she  seems to be on the surface? The answers, which must be unraveled by Detective Kusanagi, may not be be as simple and straightforward as originally envisaged.

We meet an assortment of complex characters.  What sort of man can be so unselfish that he turns away from a loving wife because she has failed to bear a child?  What sort of woman can betray no emotion as the emotional blows are dealt out and treat revenge as a dish eaten cold?  What sort of girl can cold bloodedly steal the husband of a woman who has befriended her?  Detective Kusanagi has his work cut out for him.  Detective Kusanagi's assistant, a female detective, is a delightful character, providing feminine insight into the whole sorry business, a crime involving two women.  I do hope what I'm hearing is the author's original voice.  Translated works may be technically perfect but they sometimes lose their fresh originality. I very much enjoyed the light touches of humour in the dialogue.

This is the second novel I've read by Keigo Higashino and I can honestly say that along with a talent for telling a story with layers and twists aplenty, he gives a fascinating glimpse into Japanese society, often considered complex and inscrutable by outsiders. A society where people are struggling to find some happiness and some meaning other than going about the daily grind. Would a child have given meaning and joy to the marriage of Yoshitaka and Ayane?  Who can know that? Once I pick up a book by this author, I cannot leave it down.  I generally  like to wait until I have at least two or three free hours, which has been impossible lately owing to problems with work and family.  Yet once I picked this up I couldn't leave it.  This book has the same fascination as THE DEVOTION OF SUSPECT X.  The same adrenaline rush as the book hurtles towards its inevitable - yet unexpected - conclusion.  The word 'compulsive' springs to mind.

As in the case of the previous book, I found the cluster of Japanese names a little less than easy to get my head around and repeat to the publishers that a character list at the opening of the book would be  great, if they could arrange it for future editions.  .

Yet in the end one can only say that east or west, Europe or Asia, society to society, ordinary men and women deal with the problems of life as they see fit, depending on their circumstances and cultural backgrounds.  The local can very much be the universal, depending on which way we view circumstances.

Do I recommend this book?  Yes, I do.

This review is a part of the Book Reviews Program at BlogAdda.com. Participate now to get free books!