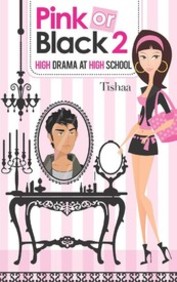 I got a chance to review this book and honestly, what an experience!  Author Tishaa had her first book 'Pink or Black' published when she was just sixteen, about teen heroine Tiana and her exploits.  And now she's back with more of the same.  'Pink or Black 2' is a slickly written novel, thirty six short chapters about a young girl/woman who is trying to do the right thing, but who has many problems to encounter.  Teenage parties and keeping a responsible eye on her friends who are being lured by drink and the delights of illicit fumblings when the parents/teachers are off the scene.

I am the wrongest person to review this book.  Or maybe not.  I am a parent. Of teenagers.  An Irish born Indian parent.  Oh heavens above, this is not the India I know.  I wouldn't dream of leaving my house under the control of a bunch of partying teenagers.  I wouldn't be that crazy.  I'd have to be on hand to see to everything.

Poor Tiana has a double weight of responsibility.  Being the 'sensible' one, she's expected to keep an eye on her immature friends as they party with abandon, succumbing to the risks of too much to drink and the chance of illicit groping (and parents, we all know where that ends up!!!).  Then when the party gets out of control the parents are disappointed in Tiana and her friends are annoyed with her for not 'stopping us on time' or some other such mad reason.  What a bunch of wimps!  With friends like that, you have a problem.

For my money, Tiana is a nice girl.  But she needs new friends.  Preferably as soon as possible.

I experienced a little nostalgia about teen 'dating' when I read this. Not that I ever actually 'dated' when I was a teen.  Dating when you're a teen in Tiana's circle means you agree with a boy that you'll 'be his girlfriend.'  Whatever that means.It doesn't seem to mean that much.  But it does seem to mean you can't flirt or dance with another boy.  While you're the boyfriend's territory, so to speak.  If your boyfriend decides to 'break up' with you because he wants to concentrate on his studies, you have to be cool and not throw a tantrum.  But if you don't throw a tantrum he may think you don't 'love' him 'cos you don't want to 'fight for the relationship.'  Oh, yeah?  Then if you ex ever so much as hears that you liked another boy while you two were still dating, boy are you in trouble.  He'll start hating you.  And turn the gang against you.  Why?  Because you cheated on him last year.  Even if you didn't.  Then you follow each other around your co-ed school saying things to each other like 'we have to have a serious talk.  We have some issues to discuss...'

If that's teenage dating, I'm glad I opted out.  What a freaking waste of time.  Somehow, I think that this story has been toned down somewhat.  Parents, read this book and get some idea what may be possibly going on (or not) in your young'un's life.

The book is well written and flows nicely.  I did enjoy reading it even if the subject matter wasn't my usual reading fare.  Well, I am a parent, not a YA.

Incidentally, as the book reaches it's zenith, a terrible twist comes in.  Tiana's grace and dignity in coping with an absolutely unjust and dreadful experience really impressed me.  I realised that I had engaged with the character, when I found myself cheering for her as she turned the problem on it head.

As for my kids, they'd better concentrate on their studies.  Or else!

This review is a part of the Book Reviews Program at BlogAdda.com. Participate now to get free books!