By Maria December 28, 2012
Last week, I didn't do my usual LBC (Loose Blogging Consortium) post.  That day I blogged for a competition to win an iPad. It was supposed to be a post to make me persuade my husband to shave more, sponsored by a razor blade company.  However, as I'm not greatly into making my husband shave,  I guess my efforts went to waste.

Another reason why I chose to blog other than my usual LBC post was really because I couldn't get any inspiration from the post title either.  "Touched".  I looked at it again and again.  Positively (or rather negatively) zero inspiration.

I got my inspiration over the Christmas however. That's why I'm blogging on the double this week - two topics, 'Touched' and 'Travelling Alone'.

One of Ireland's favourite Christmas songs is "The Fairytale of New York" by the irreverent Pogues.  Sung by Shane McGowan and the Pogues, accompanied by Kirsty MacColl, it's actually about  a fight between an Irish immigrant couple in New York who have fallen on hard times.  Drunken fights and broken dreams are part of the Irish nightmare and I don't know why, but this song struck a chord with many, myself included and has been the cause of many a tear shed around Christmas.  I visited a couple of blog by Irish expats over the Christmas, and sure enough, there it was, the 'Fairytale' with its usual dose of nostalgia.  Curious, I followed a couple of links and got the shock of my life. 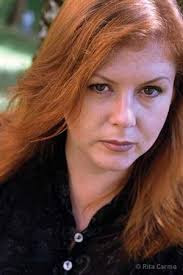 I was taken aback to learn that Kirsty MacColl, who sang the female role in the duet, died tragically in 2000.  She was only 43 and her death was an accident.  In fact she died saving her son's life, if the report I read is true.  I felt so sad.  I never knew, as I was busy with my babies in those days and not taking notice of  international news.

She was a lovely singer and I always liked listening to her.  Her songs were always unusual and thought provoking.  I don't think she ever became as famous as she should have been, but I'm sure she'll never be forgotten.  Especially at Christmas when there are Irish people listening to the song she made famous along with Shane McGowan.

As for travelling alone - well I was twenty six when I first travelled alone to India to see the man I would eventually marry.  I was scared.  I knew no one in India and I hadn't heard from him in months.  But somehow it all worked out.  I wouldn't, however,  recommend going away without internet contact and all that to anyone.  We just didn't have that sort of thing back then.  Anyway, the son of an old friend of mine from Ireland is travelling through north India and Nepal at the moment. He's never out of touch with his family thank to Facebook and the internet.  Times have changed.


This is my weekly post for my blogging group, the Loose Blogging Consortium. We post weekly (usually simultaneously) on a given topic and visit each other to see the different takes we have on the same topic.  We are, in alphabetical order, Anu, Delirious, Rummuser, Grannymar, Maxi, Magpie, Maria SF, ocdwriter, Padmum, Paul, The Old Fossil, Shackman and Will. If you have time, please visit my friends too.  The topic 'touched'  was given by Will Knott.  The topic 'travelling alone' was given by Paul.