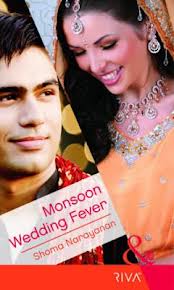 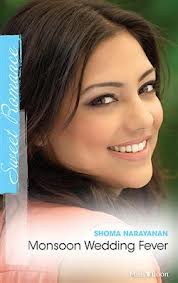 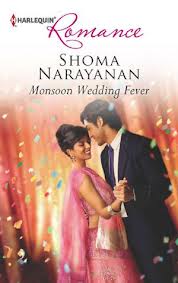 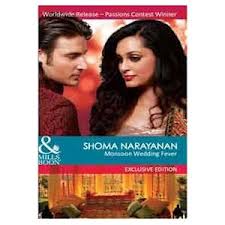 As a reader of romance fiction who lives in India, I had to read this.  Shoma Narayanan was one of the winners of Mills and Boon India's contest to find new Indian writers in 2010.  Her novel, Monsoon Wedding Fever got an international release and is now nominated for a major romance fiction award.

Harlequin Mills and Boon are known for their 'formula' romance novels.  Feelgood romantic fiction which has a happy ending.  There's usually the main characters meeting in the first chapter, the conflict, the misunderstandings, the black moment and finally, the moment of commitment.  Romance fiction is read by women the world over for its tranquillizing effect.  A good romance novelist knows how to give her reader a good time, how to make her laugh, cry and sigh in one book. Contrary to popular illusion, you can't just whip up a romance novel.  The challenge for the author is how to make the positive ending credible.  A whole generation of bad romance novels put the genre into the area of ridicule.  But some of the very best authors I have ever enjoyed reading are writers of romance fiction.  Many romance novelists write other genres too, often under different names.  In today's world, romance fiction is as popular as ever. HM&B have a range of novels of various 'heat' levels, to please the most fastidious of readers who don't want to see what happens in the bedroom to the most voyeuristic who want blow by blow descriptions every thrill and tremor.

Well, Shomaji's novel fits into the former category rather than the latter.  It's a 'sweet' romance.  Yes, the protagonists make love before they're even committed, but the readers are spared the details.  Dhruv and Riya, the couple, are modern Indians, working in Mumbai, both from traditional families and deal with everyday issues, as young professionals do everywhere in the world.  Riya struggles to help her parents financially and keep her head above water in the working world.  The Mumbai floods don't help and leave Riya stranded in her office, unable to find a way out.  But Dhruv, the hero comes to her rescue driving a mean motorcycle.  The story certainly gladdens the heart.

It's a reunion story - the pair fell in love at college, but Dhruv walked away, feeling cynical about love and romance.  His parents' unhappy love marriage had jaundiced his views.  Riya and Dhruv are reunited when they meet at his cousin's wedding.  The sparks fly again and Dhruv is ready to admit that he made a mistake by leaving Riya before.  But will Riya take him back?  A simple, down to earth girl, she is not going to let Dhruv charm her back with his money.  He's going to have to prove himself now.  Which is only right and proper.

I found the novel hugely enjoyable.  I don't know Mumbai life, but I loved the Indian atmosphere, the believable characters, especially the fact that the hero was a modern young professional man rather than some fantasy prince or a playboy.  The story felt very real, not a fantasy type story.  I loved the fact that Hindi words appeared every so often.  Over all, a very creditable romance novel, as good as any I've read.

The book's available nowadays as an ebook from Amazon.