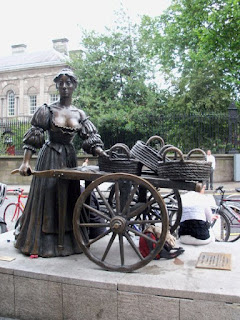 Of all the emotions I've experienced, homesickness is unique.  It can wash over me in a moment, filling me with loss and longing.  Some people find it goes on for days and days, they drown in it like a river.  With me, it's more of a flash flood. It appears as if from nowhere, carries me off and is over as suddenly as it begins.  It's hard to say exactly what triggers it off.  It could be a snatch of music, a memory or a photo.  Living as I do in a country alien to the one where I was born, raising my family what seems to be light years from my roots, I get along happily enough.  Netchatting with a cousin the other day, I was asked 'do you like it over there?',  meaning India where I live.  'Yes,' came the answer, without hesitation.  Yes, I love India, my adopted country.  But Ireland is in my heart always, particularly Dublin, the city where I was born and bred.


The above photo triggered off a bout of homesickness and sentimentality for my native place.  It's a photo of the 'Molly Malone' statue in Dublin and was taken by my cousin Megan Lopes of  South Carolina in the United States, on her first trip to Ireland.  I noticed it on Megan's Facebook album and grabbed a copy.  This statue was erected near Trinity College in Dublin in 1988 to commemorate the Dublin Milennium, the thousandth year anniversary of my native city's foundation.  That statue is not a childhood symbol for me.  I was 25 when it was erected.  But it quickly became a favourite landmark and forever symbolizes my native city.

As for Molly Malone?  She was a legendary fishmonger in Dublin, a dealer who sold her fish on the streets, shellfish of a particular variety found on the Dublin coastline.  Cockles and mussels.  I remember as a child going to gather cockles in their white shells and mussels with their blue shells on the beach with friends.  We brought them back home and boiled them in water.  The older members of the crowd happily pulled the meat from the shells and ate them.  As for me, I abstained.  For a dyed-in-the-wood Dubliner like me, it is probably not very appropriate to dislike shellfish which is available there.  Molly Malone made her living from selling the stuff.  She was immortalized in a song by composer  Percy French, which lamented Molly's premature end because she 'died of a fever'.  She appears to have lived some time in the eighteenth century.  The song, which has never had a popular recorded version is sung regularly in Dublin especially when older people get together for a 'sing song' as they call it.  I remember learning it in school.

'Dealers' or street sellers have been an integral part of Dublin life for as long as anyone can remember, and this occupation was dominated by females and passed down from mother to daughter.  Fruit, vegetables and fish are a few of the items sold by dealers.  It appears that this occupation is on the way out as modernity gathers momentum.

I'm grateful to Megan for this photo of the Molly Malone statue and it reminds me that I have been away from home too long.  A visit home is long overdue.

Writing practise is always good.  For the past several weeks I have been participating in the Writer's Workshop over at Sleep  is for the Weak blog authored by Josie George.  Josie usually gives several prompts and the participants write on whatever prompt inspires them.  This week the Writing Workshop is tying up with 'The Gallery', a weekly photo meme which originates on Tara Cain's blog Sticky Fingers.  In 'The Gallery', Tara gives a prompt and the participants come up with a post consisting of a photo inspired by the prompt.  So it's a words and pictures combination this week.  The prompt was 'Emotions' and this is week #29 of the Writing Workshop.