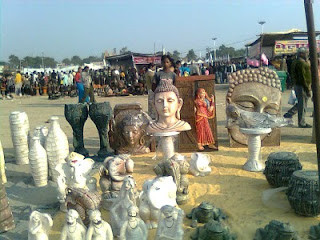 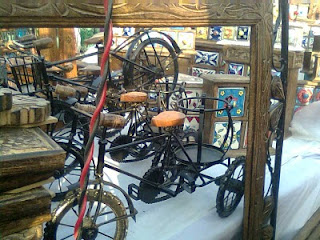 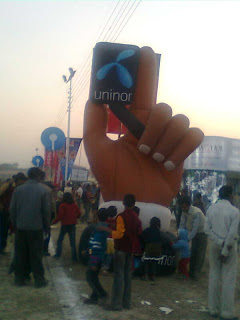 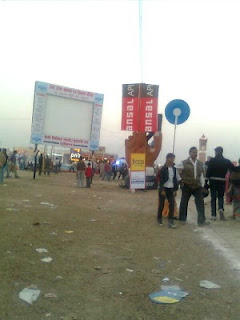 Last Sunday 5th December, I attended the annual Lucknow Mahotsav with a neighbour and two of my children.  This is a sort of fair with all kinds of crafts on sale from all over India.  They also have interesting musical shows in the evenings, but with the children keeping me busy it was possible for us only to attend during the day.  I could have got lost browsing through all the stalls.  I particularly enjoyed seeing the crafted jewellery and clothes.  I didn't come to buy anything.  I don't enjoy shopping when there is such a big crowd around and when I have children with me.  Most of my energy goes on watching them.

We even found a lost little girl there and wondered what to do.  Thankfully her mother turned up a minute later.  It must be an awful experience for a child to find themselves lost in the midst of a huge crowd.  As we were leaving, we had a few scary moments too.  The exit doors and entrance doors were more or less in the same place and there was a huge crowd there around the time we were leaving, people pouring in for the evening activities.  I had my arms around my kids in that huge crowd.  I don't know what I would have done if I'd purchased anything.  I had no energy for anything but to take care of the children.  One often reads in the newspapers of stampedes in which people are injured or even killed.  Anyway, thankfully this was not the case this time.

This was my first chance to visit the Lucknow Mahotsav since I came to live in Lucknow sixteen years ago.  This showed me that India certainly has talented people in the area of crafts.  I'm glad I managed to click a few pictures while I was there, but as I said, my main priority was the children, so the pictures are probably not as interesting as they should be.

Sundays in my City is hosted by Unknown Mami