Ever Been an Unwanted Guest? (Writing Workshop)

By Maria December 07, 2010
Some years back,  I was a single working girl  living with my mother in Dublin, waiting to join my fiance in India just as soon as we could manage it.  I wasn't quite alone in my fiance-less state.  Oh, I had my family of course, but there was this great friend of mine, Tina, who was in the same boat. Tina's fiance Tony was off in the United States, working hard to build a future for the two of them. We loved to get together to discuss our hopes and dreams every so often.

One Saturday, after an evening drinking and chatting in a nice, friendly pub, neither of us was in a mood to go home. Tina suggested we go back to her place, so I could stay the night and we could continue our chat. Her parents and younger siblings were away on holiday, she told me. Only her brother Jim was there. I agreed, so we got the bus out to her place.

On reaching the house, we discovered a party in full swing. Loud music, smoke and bodies everywhere. Jim, Tina's brother along with his girlfriend, was hosting a get together  to celebrate his recent birthday. Smiling, I wished him a happy birthday. He muttered his thanks and took Tina aside for a quick word. I looked the other way, feigning disinterest. Family matters, especially other peoples', are best left alone. Tina asked me to sit down in the drawing room for a few minutes.

I lit up a cigarette and introduced myself to the person sitting beside me. Jim's girlfriend Sandy drifted by with a plate of potato chips. My mouth watered. Tina and I had visited the Golden Arches for burgers and chips earlier in the evening, but that seemed an age away. I helped myself to a handful of chips and Sandy felled me with a look. I couldn't believe it. What was the matter with the girl? I'd been visiting this house long before she came on the scene, I was like one of the family. What was her problem?

A couple of minutes later, she came by bearing a plate of microwaved cocktail sausages. Of course she didn't offer me any and I didn't even attempt to help myself. Same with the cans of beer she came around with a few minutes later. She pointedly offered a can to the people sitting on either side of me and purposely avoided me. Don't worry, I can take a hint!

Tina appeared before me bearing two large mugs of coffee with 'I heart Dublin' written on them. Told me she was tired and just wanted to crash out. She suggested we go upstairs to her room. So we did.

We drank our coffee, chatted a little more, but the fizz had gone out of the evening. Jim and Sandy's rudeness had really ruined it for me. I got into the bed of Tina's absent younger sister, and was soon asleep. We met Jim and Sandy nursing hangovers in the kitchen the next morning. I had nothing to say, but I couldn't help thinking 'serves them right!'  Tina served me tea, toast and marmalade, cornflakes and milk. And I went on my way, back home to mum.

I've always been a bit slow on the uptake. On the bus home it hit me. Jim was obviously ripe and ready for a place of his own. It was probably only a matter of time before he moved out of his parents' home. Last night, with parents away, that had been his chance to entertain friends at home as if he had his own place. He'd probably warned Tina that the house was his for the night and to keep her friends away. Knowing him, he'd probably counted the cost of every can of beer and cocktail sausage and had no intention of wasting his hospitality on Tina's friends.  Tina of course, would never tell me this. Such has been the problem of adult children living at home with parents! 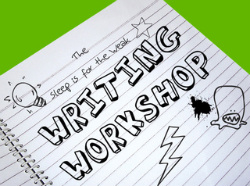 Writing practise is always good.  This has been written for the writing workshop at  Sleep is for the Weak, authored by Josie George.  The piece was inspired by this week's (#27) prompt 4, "Tell us about a time when you didn't feel welcome.