Sundays in my City #7 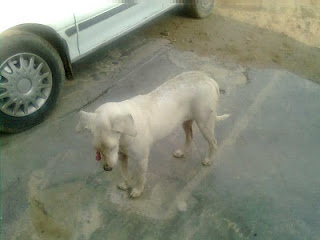 A stray dog came to our gate today.  He was very hungry.  I had to give him something, it is just not right to ignore a starving animal.  My children are very particular about feeding the stray dogs. 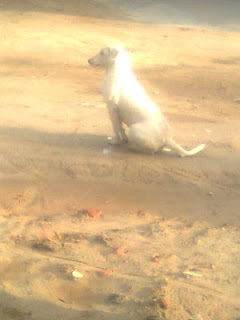 He hung around for a while.  We know him.  He's been hanging around near our gate since early summer.  He has never bothered us in any way and is quite a peaceful animal. 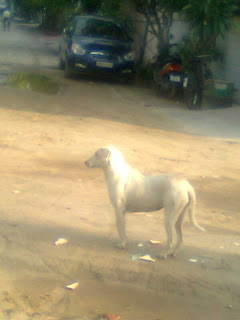 After a while, he went off on his way.  Stray dogs in our area of Lucknow have been getting a bad press lately, following an incident where some strays got into a school and bit a six year old so badly that she ended up in hospital.  It seems, however, on investigation, that the dogs had stones thrown at them by some older children.  The poor six-year old girl paid the price for that, being unable to run away fast enough.  I hear she's okay now, but it must have been an awful experience.  Maneka Gandhi, politician and animal rights activists claims that these dogs generally don't attack unless provoked.  I feel she is probably right.  But the dogs have a horrible life on the streets, dodging cars and foraging for scraps.  Then there is the ever present threat of rabies.  One thing I find difficult to believe is the fact that there are so many imported breeds of dogs here - you see labradors and St. Bernards everywhere.  These are pets, of course.  But the Indian dogs on the streets are very nice dogs and as I said, they usually never attack unless attacked first.

Sundays in my City is hosted by Unknown Mami.